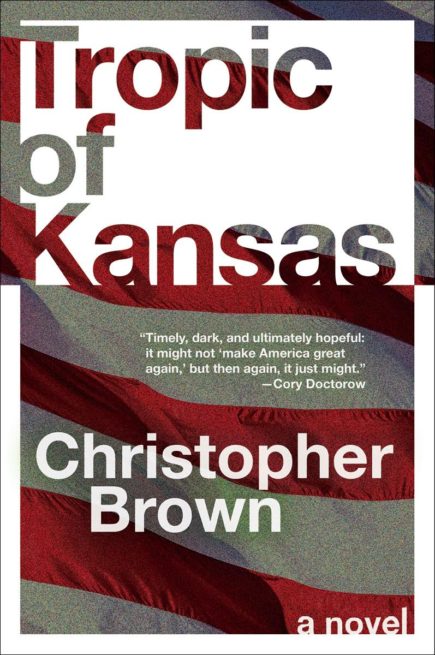 Finalist for the 2018 John W. Campbell Memorial Award for best science fiction novel of the year

“Timely, dark, and ultimately hopeful: it might not ‘make America great again,’ but then again, it just might.” —Cory Doctorow, New York Times bestselling and award winning author of Homeland and Walkaway

“The great American novel about the end of America. This book is marvelously propulsive, big hearted, and whip smart.”—Kelly Link, 2016 Pulitzer Prize finalist and award-winning author of Get in Trouble and Magic for Beginners.

“Tropic of Kansas is like a modern dystopian buffet. …It is, in this particular moment in history, frighteningly prescient. It is the nightly news with the volume turned up to 11”—NPR

“Fun, fast, violent, smart, and with enough adventure and science fiction elements to keep fans of both genres happy, this was more than a superb novel: it was the kind of book that announces the arrival of an author at the top of his game.”—LitReactor

“The brilliant feel-bad book of the summer.”—Book Riot

“A knockout first novel, paradoxically solemn yet exuberant, restrained yet inventive… Full of gravitas, wry compassion and ornery Midwestern gumption and stubbornness, Tropic of Kansas, while ripped from current headlines, also speaks to the eternal battle to weld a nation of fifty states and five thousand ideologies into an organic whole.”—Locus

“Wildly audacious… This funny, heart-wrenching book cuts through genre expectations with the speed of a jackhammer.” — The Seattle Times

“A new mutation of the alternate history novel.”—Asimov’s

“Tropic of Kansas is a unique blend of Philip K. Dick, Kafka (just a smidgen) and a whole lot of Christopher Brown. Adventure novel meets political satire and the finest elements of realistic science fiction, and it’s so well written it goes down like a greased eel. It’s hopeful dystopia. What a book.” —Joe R. Lansdale, author of the Hap and Leonard series

“Filled with the music of Pynchon, Burroughs, and Ballard.” —Rudy Rucker, Philip K. Dick Award-winning author of Software and Wetware

“Tropic of Kansas is good at projecting pain and bitterness. Finding a cure isn’t so easy, even for sci-fi. But the first step is recognizing that something’s wrong.”—Wall Street Journal

“Wildly audacious…This funny, heart-wrenching book cuts through genre expectations with the speed of a jackhammer.”—Seattle Times

“It’s hard to turn the pages fast enough as you read Tropic of Kansas. Brown writes set-pieces with a powerfully cinematic eye, but remembers to invest them in character. And, as you are reading, Brown’s visionary writing and world will drop your jaws every time his perceptions laser their way into the heart of today.” — Rick Kleffel, KQED

“This extraordinary novel is probably more American than America itself will ever get.” — Bruce Sterling, award winning author of Islands in the Net and Pirate Utopia

“Tropic of Kansas is an entertaining and engrossing read — and it shows that contemporary dystopian literature need not forgo aspects of ‘resistance’ but can, in fact, be all about it.” — Los Angeles Review of Books

“This stunning novel of a time all too easily imaginable as our own highlights a few of the keen-voiced, brave-souled women and men who balance like subversive acrobats on society’s whirling edges. Read Tropic of Kansas for the sheer pleasure of sunning yourself in Brown’s warm words; read it for its characters’ heart-stopping-and-starting actions in the face of crushing oppression, read it for the way this book melts through years of glacial dread you didn’t realize had accumulated. Read it to burn with the joy of realistic hope.” —Nisi Shawl, Tiptree-award winning author of Everfair and Writing the Other

“Debut novelist Brown brings a mordant sensibility to his depiction of a ‘flyover country’ that is no longer willing to have its patriotism exploited and its land degraded for other people’s profits. His characters do not easily triumph, because he respects them too much to cheapen the costs that they must bear to succeed.” —Publishers Weekly

“UHF-punk coolness…Tropic of Kansas is a fantasy not just of this country going bad but of how badass it would be to be the hero who sets out to save that country.”—Village Voice

“With a stark yet lyrical style, this tale carries the transgressive tradition of Huck Finn to a much, much darker place…” — Barnes & Noble Sci-Fi & Fantasy Editors Picks for 2017

“Like Jason Statham raised by wolves, Sig is a mashup of action hero and dharma bum…a re-wilding of the American.” — The Intercept

“Hang on and enjoy the dark but satisfying ride.” — Kirkus

Acclaimed short story writer and editor of the World Fantasy Award-nominee Three Messages and a Warning eerily envisions an American society unraveling and our borders closed off—from the other side—in this haunting and provocative novel that combines Max Barry’s Jennifer Government, Philip K. Dick’s classic Man in the High Castle, and China Mieville’s The City & the City.

The United States of America is no more. Broken into warring territories, its center has become a wasteland DMZ known as the “Tropic of Kansas.” Though this gaping geographic hole has no clear boundaries, everyone knows it’s out there—that once-bountiful part of the heartland, broken by greed and exploitation, where neglect now breeds unrest. Two travelers appear in this arid American wilderness: Sig, the fugitive orphan of political dissidents, and his foster sister Tania, a government investigator whose search for Sig leads her into her own past—and towards an unexpected future.

Sig promised those he loves that he would make it to the revolutionary redoubt of occupied New Orleans. But first he must survive the wild edgelands of a barren mid-America policed by citizen militias and autonomous drones, where one wrong move can mean capture . . . or death. One step behind, undercover in the underground, is Tania. Her infiltration of clandestine networks made of old technology and new politics soon transforms her into the hunted one, and gives her a shot at being the agent of real change—if she is willing to give up the explosive government secrets she has sworn to protect.

As brother and sister traverse these vast and dangerous badlands, their paths will eventually intersect on the front lines of a revolution whose fuse they are about to light.

Read an excerpt from Tropic of Kansas at Tor.com

Order Tropic of Kansas from Amazon

Order the Tropic of Kansas audiobook from Amazon