Stoked to see this Starred Review of RULE OF CAPTURE in the new Publishers Weekly—”a glimmer of hope that the usurpers of the Constitution may be beaten at their own game, ‘one case at a time.'”

(And the part of me that worked hard to tune this generic polyphony especially loves reading that “Brown keeps tight control of his narrative even as this alternate America slips its gears.”) 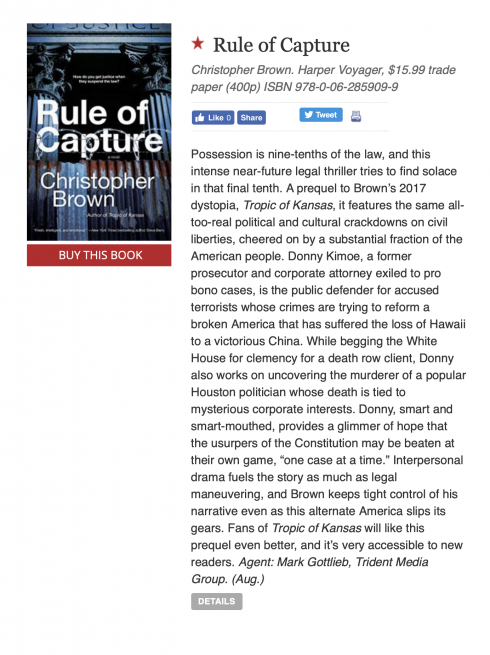 In the year 2017, science fiction writers will be invited to appear as commentators on Sunday morning public affairs shows.

I was deleted to have the opportunity to appear as a guest on “Story in the Public Square,” a great new program hosted by Jim Ludes of the Pell Center at Salve Regina University in Newport and G. Wayne Miller of the Providence Journal-Bulletin, broadcast on Rhode Island Public Television and the SiriusXM P.O.T.U.S. channel. We discussed Tropic of Kansas, dystopian realism, and the nexus of speculative fiction & American political life, in what I thought it was an engaging conversation. I very much appreciated the opportunity, and expect we will see more public dialogues like this as our daily reality becomes increasingly science fictional. 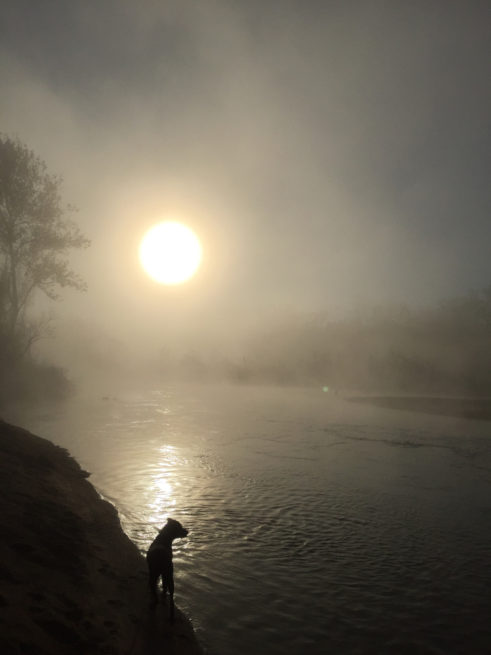 Over at Medium, some of my field notes from the Anthropocene, recompiled for the #HVScienceFair being conducted by my publisher Harper Voyager this week:

Earth Day in the Edgelands 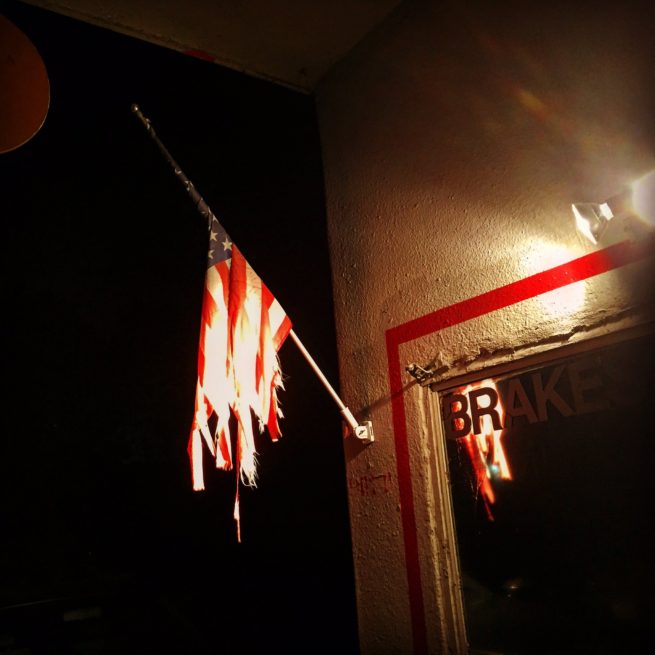 In the movie version we were taught to expect, things would have turned out differently.

You could see that version playing out right after the event, in the pictures that emerged of special ops soldiers gone neo-cowboy, Grizzly Adams beards on horseback in the cold desert, outfitted by REI and action movie propmasters, hunting down medieval necromancers in their Blofeldian mountain hideouts—a postmodern western of virtuous retaliation.

But the movie lost its final reel when the bad guy escaped capture at the big showdown.  The ending never resolved, and even when that thread closed a decade later, it was enabled by illusion, and too late to close the wounds.

This was at the same time, you may recall, that the hypercapitalist abundance of the Long Boom that had been inflating everyone’s retirement accounts for the preceding decade, disguising the workplace as playpen, was revealed as a gigantic scam procured largely through fraud.

In the movie version, when New Orleans flooded, we would not have abandoned the poor to fight it out.  Heroes in uniform would have rescued them, instead of shooting them on the bridge as they too tried to escape.

(Do you remember at the time, when the news earnestly disseminated stories that people in New Orleans were slipping into cannibalism?)

In the movie version, I suppose the bankers might have been even more criminal than they were in real life, but we would not have had to spend the better part of a decade propping up a fragile simulation of prosperity with zero interest monetary policy designed to make entropy look like growth.

In the movie version, the principal force of “change” would not be a hate-spewing narcissist freak allowed to use the mass mind manipulator of mainstream media to stoke the darkest embers of our primitive tribal natures.

On days like today I read the news and feel like we let Osama win, by breaking the master narrative and failing to heed “the better angels of our nature.”

There’s a more hopeful future out there, one we can imagine, but it won’t manifest without us doing a better job of mapping it out.  It’s a future based on diversity, equality, a conception of prosperity that embraces the limits of the land and sky that sustain us, and a freedom that finds its strength in the collective genius of many individuals rather than silverback cults of individual power acquired through competition and consumption.

The end of the Cold War extinguished the utopian visions that fueled most of the progress of the post-Enlightenment West, and 9/11 shifted the American movie into torture porn mode—the Cheneyite narrative that we must become evil ourselves in order to combat dark forces and protect our “homeland.”  Fifteen years later, we can’t seem to navigate our way back to a more redemptive endpoint.  Perhaps because we need to envision a new place to go—an aspirational destination, the kind of thing that our social theories and speculative fictions used to provide.  Dystopia may be what sells, but it’s not a place I want to live.  No one person has the answers—especially not a politician or another boss—but maybe the chorus of the networked multitude will soon write its own music.