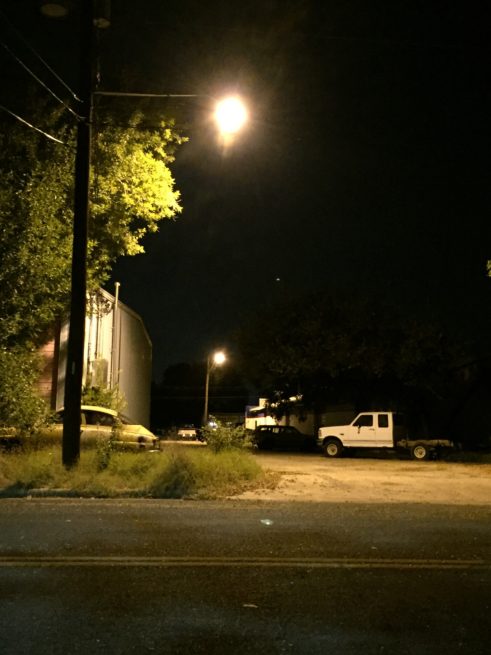 I remember a guide once told me that beaver only became nocturnal after the arrival of European hunters. I don’t know if that’s true, but I do know that there are a lot of wild animals living in the heart of the city that only come out while most of us are sleeping.

We live behind a row of light factories that shield a stretch of riverfront woods from human attention, a slice of ephemeral urban habitat. At night we hear the mysterious hoots of the big barred owls that live back in there, the howls of the coyotes, the crazy skronks of the big herons. In the mornings when I walk the dogs after sunup, we see the fresh tracks in the sand of all the critters that have just passed through, and sometimes we see who made those tracks.

The human space on the other side of the hurricane fences that hem in the factories is just as wild, and one of the things you learn over time is that a lot of those animals living in the woods head out into the city to hunt while we are sleeping. Scientists have tracked the coyotes who have colonized Chicago, and I have seen their Texas cousins at the edge of downtown Austin, trotting across the railroad tracks and down alleys. They say that urban raccoons are rapidly evolving to be more intelligent than their country cousins, as they solve increasingly challenging puzzles we make for them, like how to use your proto-hands to pry open a big plastic trash bin secured with bungee cords. If you spend enough time walking back in the woods behind the factories, you start to see the little portals the wild animals travel through to leave the woods and enter our zone of food—the bent-back corners of chain link, the drainage pipes, the spaces under the gates designed only to lock out people and trucks. 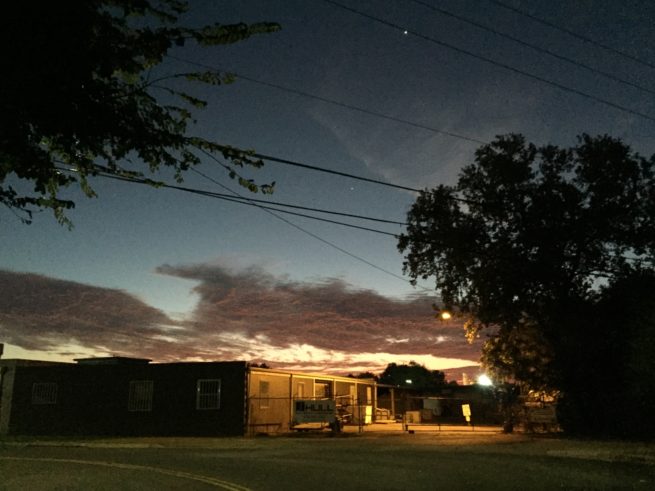 The other morning when I walked out onto the street at 4 a.m. to exercise the dogs before our early flight, there was a big semi parked along the lane, engine idling, waiting for the door factory to open for deliveries. The trucker was in there, sleeping, right by the gate where the foxes pass in and out of urban space, squeezing under the gate and through the bamboo curtain along the old roadbed to their dens back in the bramble around the drainage pipe. Sometimes we see their bushy tails in our headlights when we come home from an evening out. I wonder what they hunt in the spaces between the warehouses, after we go to bed.

That morning we didn’t see any foxes, just a free dog trotting under the streetlamps in front of the electric church. A yellow retriever mix, a color that registered luminescent in the weird municipal light.  My dogs didn’t see it it, and it didn’t seem to see us, which was fine by me under the circumstances.

We often see strays in the woods along the river, usually from afar, sometimes awfully close.  They always seem to avoid contact, and move like apparitions—through a gap in the foliage, walking along the distant bank, crossing the shallows.  Only occasionally will one approach you, and when you “rescue” a dog like that and take it to the adoption shelter, you wonder if you have deprived it of a liberty it enjoyed.

Our street is crazy beautiful at night, where nature meets noir.  That morning the sky was clear, with a crescent moon and Venus nearby in the western sky. The street is a vestigial remnant, once the road to the ferry at the edge of town.  It’s wide and straight, three long blocks, dimly lit, with beat-up metal prefabs on one side and a few houses tucked into the woods on the other. When I looked back to make sure yellow dog was not following us home, it was sitting right in the middle of the road, perfectly still, looking right at me.

Just then a raptor flew from one of the lampposts through the beam of the streetlamp, swooping for something in a neighbor’s yard. You could just make out the red of the hawk’s tail feathers for a moment before it went back into shadow. I wonder if the avian hunters have come to enjoy the light pollution of the city, the way it keeps the empty lots glowing like a dark room where someone has left the TV on.

After I put my dogs back in I took one of the leads and stepped back out to see if the dog was still there, but it was gone. 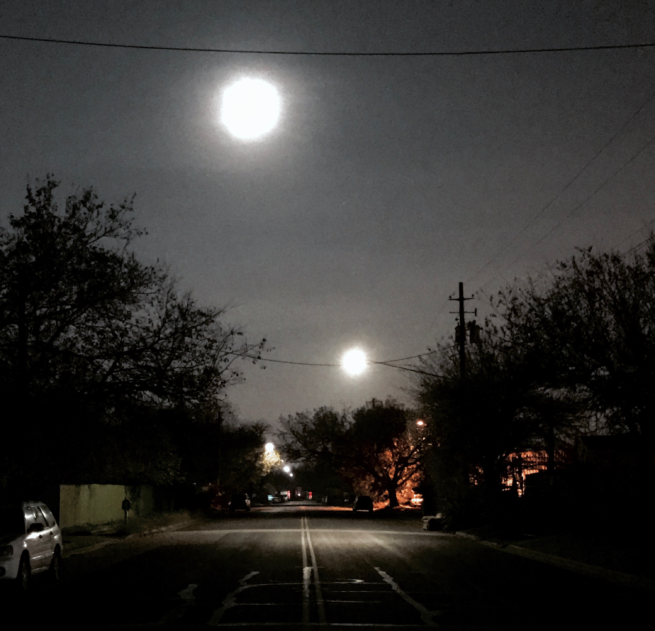